As many academic institutions begin a new fiscal year, let’s take a moment to celebrate the end of an era in academic technology transfer (TT). The long and distinguished careers of TT luminaries have come to an end as they retire or transition to less demanding positions. In the past year or so, individuals who personified professionalism and influenced TT to become a career have or soon will move on, including: 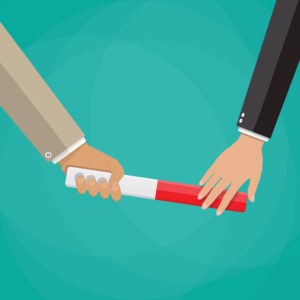 The enactment of Bayh-Dole and the emergence of many technology transfer offices (TTOs) in the 1980s and 1990s led to the institutionalization of TT and IP policies and practices that have served us well:

To be sure, some institutions have been more successful than others in achieving each of these goals. The game-winning formula for TT success has now been codified:

As in most endeavors, make no mistake — luck is a crucial ingredient to TT success.

But, times they are a-‘changin. When I started in TT in 1989, few university presidents, provosts, EVPs. and VPRs knew the word ‘entrepreneurism.’ Today, TTOs face pressures from multiple sources to advance the innovation ecosystem and promote entrepreneurism: 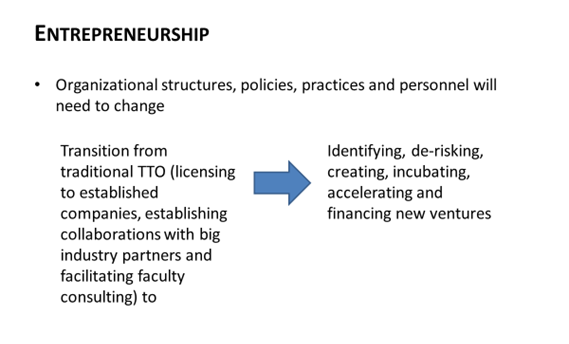 Stakeholders from all directions are ‘encouraging’ TTO leaders to do more; and, TT professionals have responded. TTO policies, practices, organizations, and personnel are adapting to address a changing, far more entrepreneurial landscape. In the year 2000, U.S. academic institutions reported the creation of 388 startups. By 2015, that number had risen to 1,012 [AUTM Licensing Survey].

TTOs have seen (and often written) the writing on the proverbial wall. TTOs are leading and supporting university entrepreneurial innovation ecosystems with a wide variety of program initiatives, including:

That said, criticism of TTOs from startup investors continues. First and foremost among the complaints is ‘why does it take so long to get a deal done?’ Indeed, my friend and colleague Kirsten Leute, SVP of University Relations at Osage University Partners, addresses this issue in her recent blog post.

And, too many institutions continue to measure success in terms of numbers of startups launched. To be fair, neither AUTM nor any other group has sought to define a ‘startup’ in terms of requisite management or capital raised. Thus, to deal with perception of productivity, the ‘arms race’ to launch and report higher numbers of startups continues. Perhaps a far better productivity reporting metric is the amount of capital — $$$ — startups have raised? Notable institutions have distanced themselves from this rat race and instead are focusing on creating few quality startups able to attract investable management and venture financing.

Finally, kudos to the next generation of TTO leaders, many of whom have ‘apprenticed’ with those named above. Others are new to the field. As in the past, TTO leaders come from a variety of backgrounds — scientific, legal, commercial, and other. All, however, those past and present, have undertaken a most challenging charge. The goals of TT have remained constant: facilitate commercialization for the public good; reward, recruit and retain faculty; induce closer ties to industry and investors; create economic growth; and generate income. How we get there is as varied as the personalities who lead.