Our daughter, it seems, emerged from the womb negotiating; our son was more laid back. Today, she’s still at it (as are her 3 daughters) and our son has effectively learned when and how to negotiate for what he needs and wants. Becoming a skilled negotiator is achievable, regardless of personality type. Here are 10 Rules my daughter and son (and the good folks at Harvard Law School’s Program on Negotiation — Getting to Yes — and others) have taught me about effective principled negotiation.

Like a lot in life, showing up prepared is important. A poorly prepared negotiator can only react. It’s OK to see what the other party has to say, but only if you’re prepared.

First and foremost in preparing is the decision whether the negotiation is:

The first step in preparing to negotiate is to learn about the counter-party — credentials, experience in licensing academic discoveries, and others’ experience with them.

If the negotiator on the other side is a member of AUTM/LES/ASTP and is a CLP/RTTP, then the prospect for a successful negotiation is excellent. If not, be prepared to explain:

Be realistic in your financial expectations. Your goal is to get the technology out there to be further developed and commercialized for the public good. You have no chance to win if you don’t play. Every negotiation takes place in context of the situation of the parties, circumstances of the negotiation and prior history, experiences, perceptions and biases.

Open positively. Try to enter the negotiation emotionally centered, courteous and amicable. Frankly, that’s easier said than done for some people. If you’re one of those people — fake it.

Ask and listen; don’t tell. There’s a reason you have 2 ears and 1 mouth! Seek to establish a productive beginning relationship before contentious issues arise, because they will arise. Begin the negotiation addressing terms to which both parties are likely to agree, e.g., scope of the license grant.

Think of deals that just felt wrong from the very beginning. Were they successful? My guess is they were not. Thus, it’s imperative that you be forthcoming in communicating your needs clearly and openly. Remember — needs, not wants.

“Bad blood” resulting from unprincipled negotiation will often negatively impact the relationship. After all the hoopla and the signing, hopefully, you’ll be ‘living’ with each other for a long time. Be sure each party gets what each party needs. Terminating a deal is often difficult and, too often, only the lawyers win. Make the entire relationship and agreement(s) workable. Don’t be pressured to accept unworkable arrangements just to get it signed.

So, how to value and set price expectations? Who makes the first offer? What’s the basis for the offer and price? How to anchor value and price appropriately and make the first offer within a negotiation success range?

In my experience, academic Technology Managers rarely make the first offer and therefore relinquish the opportunity to establish the anchor and ceiling (the most the licensee will be asked to pay). That’s a shame because setting a realistic anchor establishes one end of the negotiation success range. And, a realistic anchor (not a high ball offer) is hard to move. (The converse is also true. A low ball offer from a licensee is counter-productive in a principled negotiation because it damages the negotiator’s credibility and trustworthiness.)

If you’re comfortable with the technology/IP, know the comparables, understand at a high level the market opportunity and are able and willing to share your valuation analytic framework (cost/market/income methodology), research has shown that making the first offer effectively anchors the negotiation, sets a ceiling and establishes the basis for a successful negotiation outcome. 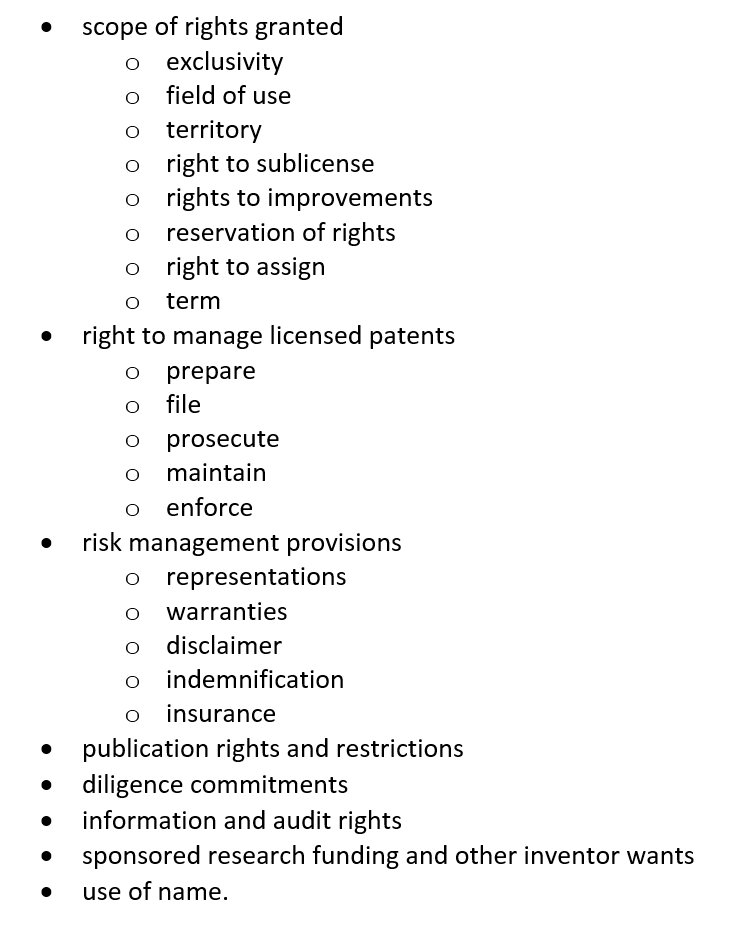 Rule 5 — GET PAID EVERY WAY POSSIBLE, BUT BE REASONABLE ON PRICE

After the parties have agreed to these essential non-financial terms, turn your attention to financials as they are customary and standard in the technology sector. For example, don’t expect royalties on non-patented software. Expect royalties and sub-license revenue sharing for IP/technologies leading to healthcare products (therapeutics, vaccines, diagnostics and devices) and never accept equity only in healthcare related licenses.

Don’t put all your eggs in one basket. Get paid every way reasonable. But remember, it’s a relationship, so don’t try to squeeze out every possible consideration. Likewise, licensees are often too smart for their own good. Fiercely negotiating price but forgetting about good will, good faith and fair dealing as well as forgetting that in all likelihood the license will need to be re-negotiated at least once is short-sighted.

Rule 6 — A CONCESSION EASILY GRANTED IS NO LITTLE VALUE

Rule 7 — DON’T NEGOTIATE AGAINST YOURSELF

Rule 8 — SILENCE IS GOLDEN AND PATIENCE AND PERSISTENCE PAYS

Research has shown that the first person to speak after a period of silence following discussion of a challenging issue LOSES. Good negotiators learn how to accept and be comfortable with silence. Silence is a powerful negotiation tactic.

Too many negotiators are insufficiently persistent. If there is good basis for an ask (financial or non-financial), by all means make it. If custom and practice and/or valuation methodology support your ask, be persistent. Explain, repeatedly if necessary, your assumptions and analytic framework. Persistence is an attitude of determination. Likewise, patience is a virtue in a negotiation. Be dogged in a rightful pursuit.

Rule 9 — ALWAYS BE CLOSING AND DON’T FORGET TO CELEBRATE

Sales 101: Always be closing. Throughout the negotiation, summarize and confirm areas of agreement as each is achieved. If you’re so fortunate to have a summarizer as part of the negotiating team, that’s this person’s role. Ideally, end negotiations on an affirmative note and take the time to celebrate the commencement of a relationship.

Many TTOs have a post-signing / recording / implementation protocol. Follow up as appropriate to obtain the necessary signatures and summarize the agreement(s) and each party’s obligations. Advise key stakeholders and determine who and what are required to implement. Maintain contacts and relationships and plan for at least an annual review and highly probably future re-negotiation and/or amendment. Experience indicates that virtually all “performing” academic-industry licenses are amended, often multiple times.

In summary, the keys to principled negotiation are:

So, if you’re a natural negotiator, think about these rules and use them. If you’re not a natural and ‘confrontation’ is difficult for you, think about principled negotiation as a process; learn the steps, implement them and you’ll see how ‘natural’ they’ll begin to feel.

Today, my daughter is a mommy of 3 of my 5 granddaughters. (That’s right 5 girls; as my wife says, I’m a very lucky guy.) She’s getting her share and more from her born and bred negotiators. My 3 little girls are giving their mommy a taste of her own medicine, constantly negotiating. It’s too soon to characterize my son’s 2 daughters; they’re both under 2. But, the older one, she’s a pistol and whether she’s a born or bred negotiator…she’s just too cute and getting her way.

*The points noted in this blog are part of a larger talk on negotiations provided by Louis Berneman to OUP’s academic partners.